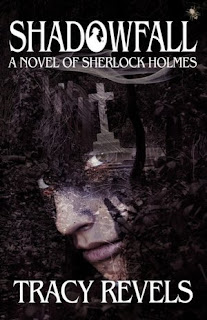 This review is going to begin atypically. Instead of providing the usual overview of the novel’s plot, I’m going to go ahead and acknowledge the elephant in the room: Shadowfall is a fantasy novel. Tracy Revels unabashedly places Holmes and Watson in a paranormal context from the first page of the book. My general dislike of the combination of Holmes and the supernatural meant that when I began the story, I was not expecting to enjoy it. That’s why it was such a shock to find it to be one of the finest Holmes pastiches I have ever had the pleasure to experience.

Revels creates a world in which Holmes is fully himself as characterized by Conan Doyle, with his canonically intriguing mixture of brusqueness, cleverness, mercurial temperament, and loyal friendship. Watson’s narrative voice is also as spot-on as anything I have ever read that was not written by Conan Doyle. Early in the story, a crisis is revealed that concerns both the human world and a shadow world inhabited by mythical creatures and folk legends alike. Holmes, the reader learns, belongs partly to that world and partly to ours.

Watson is the audience’s eyes and ears for an entertaining romp through the natural and the supernatural and guides us through a world in which cigar ash can have magical properties and honeybees are more than they seem. More than simply borrowing Holmes characters, strong ties to the canon and tasteful echoes of Conan Doyle show that Revels knows Sherlock Holmes inside and out and has a firm enough grasp of the original context to re-situate the characters in an extremely skillful manner.

Buy it at our bookshop!

A copy of Shadowfall was provided for consideration by MX Publishing.

Posted by The Baker Street Babes at 14:16