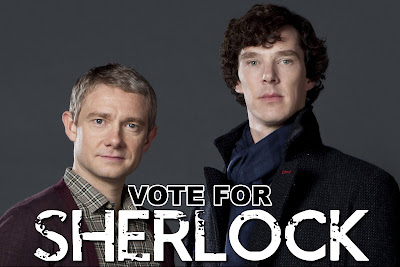 Sherlock has been nominated in the BAFTA YouTube Audience Award! This is a public vote for residents of the United Kingdom only (sorry!). The show with the most votes by the ceremony will win. Sherlock famously lost last year to The Only Way Is Essex, which was not only a crime against humanity, but against good television. Martin Freeman did not approve.

We need not again incur his wrath. So please [VOTE] if you can, and spread the word if you're not in the UK. Sherlock is the best thing on television. It deserves to win.
Posted by The Baker Street Babes at 08:00