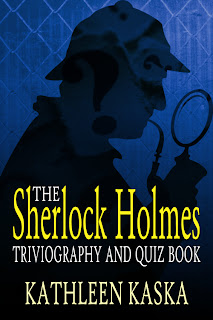 It’s a great time to enter the world of Sherlock Holmes. The BBC’s Sherlock series and the Guy Ritchie Holmes films have ushered in millions of new fans, a great many of whom have gone on to explore the Granada tv series and the canonical stories by Sir Arthur Conan Doyle. As a result, the glossy second edition of Kathleen Kaska’s engaging quiz collection comes at a particularly apt time

Kaska’s book consists of 80 quizzes covering the Holmes stories, the author, and much more, as well as five crossword puzzles. In addition, each section contains a small introductory essay with valuable information about aspects of the canon.

One thing that sets this particular work apart is that the quizzes presented are not filled with only simple, surface questions. New fans and die-hard Holmes devotees alike will be amused and perplexed by some of the more detailed queries, and even the most experienced Holmesian will come away with increased knowledge.

The Sherlock Holmes Triviography and Quiz Book would be a fantastic gift for a new or old Holmesian. It’s a particularly great book to have on the coffee table to provide hours of entertainment and enriched knowledge of the detective’s world.

Buy it at LL Publications
Buy it at Amazon.com [US] [UK]

A copy of this book was provided for consideration by LL-Publications.

Posted by The Baker Street Babes at 17:49