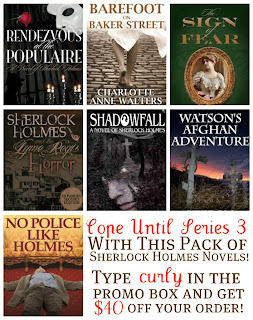 The ‘Cope Until Series 3’ Pack
Like us you are probably depressed that the next series of BBC’s Sherlock is not due until 2013. There is however something you can do to limit the pain. Keep yourself busy with new Sherlock Holmes stories. With that in mind we have put together a bundle of eight of the most exciting new Holmes writers of 2011 with their debut novels. Start at the beginning of the stunning fantasy series from Tracy Revels with ‘Shadowfall’, the Holmes vs criminal masterminds series from Kate Workman with ‘Rendezvous At The Populaire’, take a look at the world of Holmes through a lady’s eyes in ‘The Sign of Fear’ from Molly Carr - and for a bit of military action ‘Watson’s Afghan Adventure’.

Type ‘curly’ in the promo box to get $40 off the bundle while stocks last. 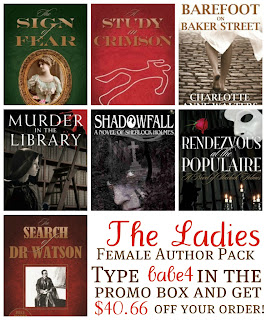 The ‘Female Holmes Writers’ Pack
Seven books from the best female Sherlock Holmes writers in the UK and the USA.

You can buy these and more at The Baker Street Babes Bookshop, which is full of pastiches, Sherlock Holmes travel guides, memoirs, and more!

Major thanks to our partners at MX Publishing for putting together these amazing deals! We have more coming, so stay tuned!

Posted by The Baker Street Babes at 07:12