Deducing John Watson: A Character Study
By Ardy
This essay was up at the Baker Street Supper Club before the main website went down. We recently had an ask about John on the BSB tumblr, so I thought this was a good opportunity to bring it back. It was written before we had Series 2, so it focuses on John’s characterisation in Series 1.

It's long so click the link below to read it all! 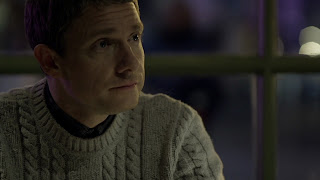 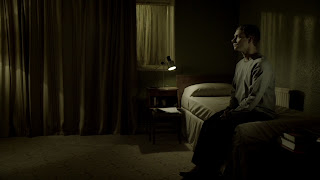 John Watson is a three-dimensional character who has more to him than meets the eye. Sherlock may be able to stun us with brilliant deductions, but John certainly has equal power to surprise us. Part of this is due to his visual appearance: he dresses in clothes that are quiet and functional; he looks unassuming. This makes it all the more surprising for us to discover what he is capable of.

When he is introduced as a character, he is physically and mentally injured, he is unemployed, and except for his mate Mike Stamford, there is no one to help him out— no friends, no family he is close to. As the first episode goes on, however, we get to see that in spite of these difficulties, he is a very capable man.

He seems to embody a certain duality within his character, much of which stems from his twin professions as soldier and doctor, which superficially seem to be at cross-purposes: Soldiers kill people while doctors help people and sometimes even save their lives. However, he never uses a gun unless it is in self-defence, and from the way he is portrayed in general, the implication seems to be that saving and protecting others’ lives is at the core of his motivation - something that is true of many real-life soldiers as well. This idea is important to bear in mind when considering John Watson.

John Watson’s relationship to Sherlock Holmes: Nerves of steel…
In the Sherlock Holmes canon, it takes a long time for the two men to build up a friendship, whereas on the BBC show, John and Sherlock have a close emotional connection almost instantly. So what are John’s motivations for associating with Sherlock? 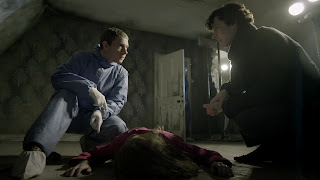 First, John is a thrill-seeker, although he may not realise this himself. His reaction to being abducted and interrogated by Sherlock’s “arch-enemy” while simultaneously receiving texts from Sherlock ordering him to come to Baker Street immediately for something that “could be dangerous” is perfect proof. Whereas another person would probably decide to get out of the situation at this point, John’s reaction is to stop off at home to get his gun and then proceed to 221B Baker Street. As Sherlock’s “arch-enemy” puts it: “You’re not haunted by the war, Dr. Watson. You miss it” - a spot-on observation. Dangerous as it may be, joining Sherlock on his cases is, to John, a chance to apply his skills and to feel useful, something that he has not been able to achieve in “civilian life” thus far.


The second explanation of John’s motivations lies in the way he sees Sherlock and how this opinion changes as he observes Sherlock’s behaviour over the course of the show. At first, John is full of admiration for Sherlock’s cleverness. When Sherlock demonstrates his methods of deduction to John for the first time, John finds this “extraordinary, quite extraordinary”. He displays similar reactions throughout the show, sometimes to the point where Sherlock asks him “Do you realise you do that out loud?”


However, John learns very soon that there is a darker side to Sherlock: He seems to have no regard for moral conventions whatsoever – shown with lines such as “Who cares about decent?” – and he is not above taking off without explanation, leaving John to be abducted by a strange man who has power over every CCTV camera in London and access to his therapist’s notes. Even before John is abducted, Sergeant Donovan warns him to stay away from Sherlock because he is, in her view, completely amoral about his work: “One day we’ll be standing around a body and Sherlock Holmes will be the one who put it there.”


To John, who, at this point in time, has just witnessed a display of Sherlock’s disregard of moral standards, this must make a lot of sense. But rather than actually staying away from him, he seems to feel obliged to not let Sherlock go over the edge. That he is putting himself in danger to do so shows that he is willing to risk a great deal if he thinks the cause is worth it. When he expresses his concerns to Sherlock, repeating Sergeant Donovan’s words “You enjoy this, you get off on it,” Sherlock simply retorts with “And I said dangerous – and here you are,” thereby making John aware that he, too, enjoys the thrill of putting himself in danger, and that, in this respect, they are more alike than John realises or cares to admit. 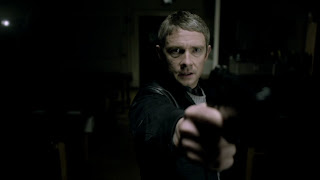 … and a strong moral principle

GREA explores this idea of John as Sherlock’s moral compass in great detail. While there is the idea that John is the heart to Sherlock’s head, it seems that sometimes in GREA, things are a bit more complicated than that. In this episode, John is the voice of compassion. Unlike Sherlock, he cares about the victims of the anonymous bomber, which can certainly be read as him being “the heart” of the relationship - but he is also the voice of reason and common sense, constantly calling Sherlock on behaviour that he considers morally unacceptable. The crucial scene that illustrates this is their argument after one of the hostages dies. Sherlock laconically observes that he just “lost that round”, suggesting that he treats the crimes as a game with little regard to the moral implications. John’s line, “There are lives at stake, Sherlock. Actual human lives. Just so I know, do you care about that at all?” and the ensuing exchange illustrate how much he disapproves of this attitude.

Yet, despite disagreeing with Sherlock’s attitudes and behaviour, John is still willing to kill for him and even to lay down his own life to save Sherlock’s, as evidenced by the final scene. This is not only a testament to his loyalty to Sherlock but also illustrates that in the greater scheme of things, John believes that in protecting Sherlock Holmes, he is on the right side of morality.


It could be argued that, by associating with Sherlock, he changes from someone who feels that he has no purpose in life (“Nothing happens to me”) to someone who finds a purpose in protecting others - in this case, especially Sherlock - and being prepared to save others’ lives, even if it is at the cost of his own. This is consistent with the outlook that a trained soldier would have and the attitude they would have towards a comrade in arms.


By the end of the final scene of GREA, when both of them have rescued each other and are facing Moriarty, there is an unspoken understanding that it is better for both of them to die there and take Moriarty with them than to survive and have Moriarty on the loose. From John’s point of view, this reflects the wish of a soldier that his death, perhaps even more than his life, should have meaning. 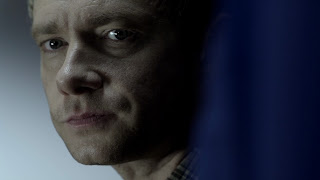 Make sure you reblog or like this post on our tumblr! Show Ardy (and John!) some love!
Posted by The Baker Street Babes at 09:10