Be prepared for old fashioned English humor, some Bram Stoker chatter, Southern twang, and lots of Sherlock Holmes love (as always). Holmesian authors Gerry O'Hara and Tracey Revels chat with Babes Maria & Taylor about Sherlock Holmes and the supernatural. From Dracula to Titania with a dash of Lord of the Rings and bunnies (what?).
Gerry O’Hara is an English film and television director. O’Hara was an assistant director on Laurence Olivier’s film, Richard III; the Carol Reed film, Our Man in Havana and the Academy Award-winning Tom Jones. O’Hara’s directorial debut was the 1963 cautionary tale That Kind of Girl, about the dangers of contracting venereal disease. During the 1960s, he directed episodes of The Avengers and a film based on a Van Der Valk novel by Nicolas Freeling, Amsterdam Affair. O’Hara directed the highly controversial film The Brute. O’Hara directed and wrote the screenplay for the 1979 film, The Bitch, an adaptation of the Jackie Collins novel. Later television credits include directing and writing episodes of The Professionals, script editor for the ITV series C.A.T.S. Eyes and directing an episode of Press Gang. Most recently he has become a published author, writing Sherlock Holmes & The Affair of Transylvania.


Sherlock Holmes and The Affair In Transylvania is a complete re-telling of Bram Stoker’s Dracula, incident by bloody incident.   When Dr Watson tells Holmes the distressing news that his niece’s husband is missing on a visit to Count Dracula, the great detective decides that he and Watson should journey to Transylvania.


Tracy Revels is a professor of history at Wofford College in South Carolina, and author of a few Sherlock Holmes pastiches! The most notable is Shadowfall.


When the sacred relics and mystical objects of London begin disappearing, Sherlock Holmes must call on more than his powers of deduction to solve a mystery that threatens the safety of the British Empire and Doctor Watson’s mortal soul.


And we’re happy to say a sequel was written, entitled Shadowblood.


A sequel to Shadowfall, this novel continues the adventures of Holmes as a man of two worlds, gifted with both deductive and magical powers. The convalescing Watson’s country holiday is brought to an abrupt end when an eccentric recluse named Edgar Telfair demands that Holmes investigate his daughters disappearance. Holmes’ refusal to take the case is followed by Telfair’s sudden, horrific slaying. The act revives Watson’s suppressed memories of the Shadows and reintroduces him to Holmes s double life. Together Holmes and Watson must find Alice Telfair, a witch whose shocking powers are obtained through blood magic, the vilest form of sorcery. Tracking her from Paris to Prague to America, they soon learn that she is traveling with a shadowy figure equally as dangerous. Old friends, including Lestrade and Mycroft, assist Holmes and Watson in their quest. In America the pair enlists new allies: a Pinkerton agent with a past, a Seminole showman, a blind photographer whose cameras capture the spirit world, and a strange little boy destined for a frightening future. But Holmes and Watson are being stalked, not only by Alice Telfair and her hideous assistant, but also by a mysterious interloper whose quest for justice stretches from beyond the grave. 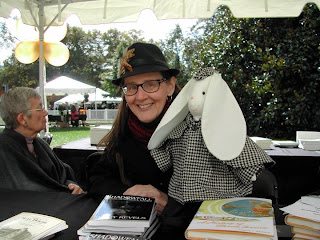 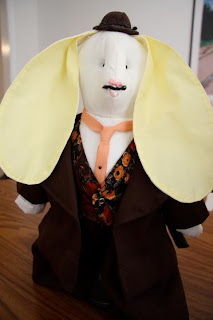 Doctor Wabbit!
Posted by The Baker Street Babes at 10:38