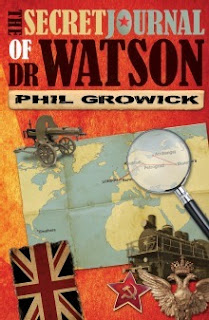 Upcoming publication The Secret Journal of Dr. Watson takes Sherlock Holmes and his Boswell on an adventure to Russia during the Bolshevik revolution, putting them in contact with historical and fictional figures alike as they pursue the rescue of the Romanovs. Danger stalks them at every turn, and they are constantly confronted with their own mortality and the need for the detective’s mind to be at its most keen.

Growick takes the traditional approach of using Watson’s voice, conveyed in daily journal entries. This technique is effective, and the Holmes and Watson encountered by the reader are canonical and engaging. The book bears the official Conan Doyle estate seal with good reason; the quality of its research and writing are impressive.

History buffs will be particularly intrigued by the layered and fascinating explanation of the complexities of the Russian revolutionary situation, but those just looking for an enjoyable read will find themselves far from bored. Growick strikes an enjoyable balance between historical believability and fast-paced action.

Most of the Doylean stories keep Holmes and Watson close to home, putting them in London-based contexts or in the surrounding English countryside. Growick’s novel, with its more exotic and high-stakes setting, fits neatly with the later stories, those that place Holmes in retirement and beyond.

The Secret Journal of Dr. Watson is mysterious, intriguing, and fun, a chilling and thought-provoking exploration of a period of Russian history that engenders a great deal of speculation. Of course, we know that Sherlock Holmes and Dr. Watson never actually went to Ekaterinburg to find the Romanovs. Or do we? Phil Growick’s excellent novel will make you believe they did.

Buy it at our bookshop!

A copy of The Secret Journal of Dr. Watson  was provided for consideration by MX Publishing.

Posted by The Baker Street Babes at 21:56