Sherlock and Transmedia Fandom: Essays on the BBC Series 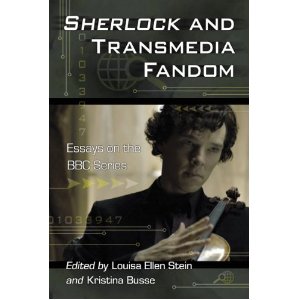 The critically-acclaimed BBC television series Sherlock (2010- ) re-envisions Sir Arthur Conan Doyle’s detective for the digital age, joining participants in the active traditions of Sherlockians/Holmesians and fans from other communities, including science fiction, media, and anime. This collection explores the cultural intersections and fan traditions that converge in Sherlock and its fandoms. Essays focus on the industrial and cultural contexts of Sherlock’s release, on the text of Sherlock as adaptation and transformative work, and on Sherlock’s critical and popular reception.

The volume’s multiple perspectives examine Sherlock Holmes as an international transmedia figure with continued cultural impact, offering insight into not only the BBC series itself, but also into its literary source, and with it, the international resonance of the Victorian detective and his sidekick.

Introduction is by our own Lyndsay Faye!

Posted by The Baker Street Babes at 15:04