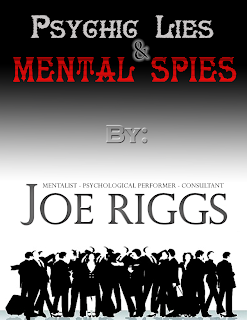 Have you ever wanted to think like Sherlock Holmes? Have you wondered how that “mind palace” or “memory attic” works which has recently been mentioned in Sherlock BBC’s “Hounds of Baskerville”, and which Doyle wrote of in “A Study in Scarlet”? Have you been impressed by the great detective’s deductive powers and been envious of his abilities? Joe Riggs, who is sometimes called the “real Sherlock Holmes,” has written a book to show us how we can do it, too.

Joe Riggs begins his book with congratulating the reader on even coming as far as reading the first lines of it; and in a sense that is very understandable. From a first impression, the book might seem like just another weird pamphlet about psychic powers and mentalists; something which one might find in a New Age book shop in a little side street. But once you get reading, it becomes obvious very quickly that the author is not trying to teach us any supernatural powers and explain how to communicate with the dead; no, quite the opposite is true. Having grown up among mentalists and psychics and having witnessed how they often use their abilities to play with the emotions of those asking for their help, Riggs decides to show us how they work. And not only does he let us look in his cards, so to speak, but he also teaches us some tricks to further our own mental abilities and observational skills.

Riggs uses Sherlock Holmes’s character both as an example and an inspiration to show how capable we all are of using our minds way beyond what we think we can do. He talks about the tools he uses in his work as a mentalist, giving each of us a chance to enhance our learning abilities and become better observers.

“It‘s time to learn some wonderfully mental things,” he writes; and this is what the book offers us. It is a wonderful guide working with Riggs’s own experiences, scientific discoveries and logical explanations in a way which is not at all patronising, but helpfully suggesting how we can become more aware, healthy and perceptible of our surroundings.

Appealing to the reader, Riggs promises that everyone who finishes the book will be surprised by what they can achieve; and believe it or not, it is not an empty promise. Joe Riggs explains to us which devices he uses “as a Mentalist that can expand your mind-power, super charge your memory, heighten your deductive and observational powers, and transform the way you think.” Yes, he offers tips how to build our very own mind palace and how to easily memorise large numbers … or our shopping list. In addition, he explains how to read people by becoming aware of the mechanics of non-verbal communication. Remember Doctor Lightman in “Lie to Me”? Yes, that is exactly what we are talking about here; only that Sherlock Holmes and Doctor Lightman are fictional characters, whereas their techniques are very real and, let’s face it, very cool.

“Psychic Lies & Mental Spies” is out today. For more information, visit Joe Riggs’s website or you can buy the book from Amazon.

Posted by The Baker Street Babes at 12:30