Review: Sherlock Holmes and the Affair in Transylvania 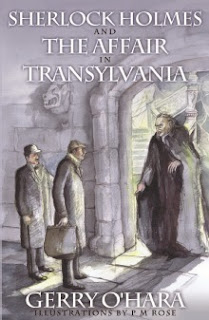 The case papers are narrated by John Watson in the usual fashion of a detailed account of events from his point of view. O’Hara’s Watson sounds quite a bit like Doyle’s, with few liberties on the author’s side, which are not at all detrimental to the story.

What we read is the story of Dracula in every sense of the word. While Holmes and Watson are away in Romania for a case, Watson receives a letter from his nice Mina, who lives in Budapest, and who is asking for help to find her disappeared husband Janos. Holmes and Watson travel to Hungary to meet Mina and her friend Lucy Westenra, and take on the case. Soon they find themselves on their way back to Romania and to Dracula’s castle.

What follows is a surprisingly entertaining retelling of the story of Bram Stoker’s Dracula. While some of the protagonists, like Mina and Lucy Westenra, are borrowed directly from the story, others, like Janos, are loosely based on the text’s original characters. Budapest serves as the equivalent of London and Sherlock Holmes himself takes on the role of Van Helsing.

The voices of Holmes and Watson are delightfully similar to Doyle’s characters and despite the fact that the adventure they experience is very familiar to everyone who has read Stoker’s Dracula, the novel manages to be suspenseful and surprising. This can be attributed to the new narrative perspective, which is limited to that of John Watson instead of the epistolary form of diary entries and letters in Stoker’s text. The familiar voice of John Watson guides the reader not only through the adventures, but also through Holmes’ deductions, effortlessly connecting the two literary worlds through the eyes of the narrator.

Sherlock Holmes and the Affair in Transylvania is an entertaining and smooth read. It is a new take on a familiar story which works surprisingly well. O’Hara constantly refers to past cases and therefore links his own story to Arthur Conan Doyle’s stories; so fans of the original Holmes will smile and nod to themselves when they find these references. And while it might not be a typical Holmes story for the many supernatural elements in it, it is nevertheless a book which caters to both fans of Doyle’s and fans of Stoker’s works. It is a funny, delightful and very intelligent retelling of two of the most beloved Victorian works of fiction and I can wholeheartedly recommend it!

You can buy the book in The Baker Street Babes Bookshop!

Posted by The Baker Street Babes at 09:00