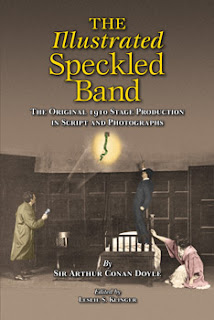 The idea of Sherlock Holmes in the theater tends to bring images of William Gillette to mind, the actor whose play Sherlock Holmes and portrayal of the detective garnered acclaim that continues to this day. Less well known to current Sherlockians is the fact that Sir Arthur Conan Doyle himself successfully dramatized one of his most popular stories, “The Speckled Band.” Thankfully, The Illustrated Speckled Band provides a comprehensive overview of this tantalizing piece of Holmesian trivia.

The book consists of four main elements: the text of the play, photographs of the original stage production, an original review of the production, and an essay that relates the play to the short story. For those familiar with the text of the story, the play reads a bit like a movie script taken from a print source—it follows the same general pattern, but many of the details have been changed for dramatic effect and convention. Conan Doyle’s ability as a dramatist is immediately apparent in the masterful use of humor and foreshadowing.

The photos, placed alongside the text where they naturally occurred in the production, are a rare treat. They not only shed light on direction and staging, but they also reveal something of the Adelphi Theater acting style just after the turn of the century.

The critical review, from The Playgoer and Society Illustrated, is a charming window into the journalism of the period and the popular opinion of Conan Doyle. The paper’s short biographical articles about the main castmembers are also included and contain such gems as this amusingly purple quote from Christine Silver, who played the lead female character: “You will say this is very feminine. Well, I admit the soft impeachment; it’s a woman’s privilege. A man lives and forgets; a woman lives and remembers.”

Finally, the essay by R. Dixon Smith does an excellent job of illuminating the circumstances that surrounded the writing of the play and the ways in which it compares and contrasts with the source story. It’s a satisfying way to conclude a very unusual volume.

The Illustrated Speckled Band is appealing in three particular ways. Its obvious Holmesian appeal lies in the rarity of what is included and the extensive presentation of a little-known piece of Sherlockiana. Additionally, it offers an unusually detailed look at British theater in 1910. Finally, for historians, it gives a glimpse of the ideas and attitudes of actors and reviewers during Conan Doyle’s time. It’s an enjoyable book to read, but its beautiful cover design also makes it a great addition to the bookshelf or coffee table of any Sherlock Holmes lover.

A copy of this book was provided for consideration by Gasogene Books.

Posted by The Baker Street Babes at 09:59