The Baker Street Babes to be on The Today Show! 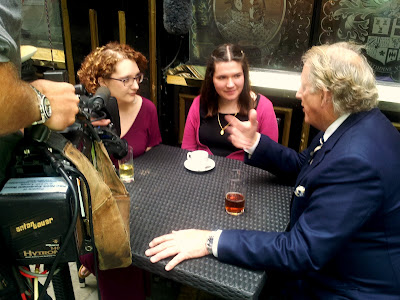 Delighted to say that Curly and Kafers were interviewed by NBC’s The Today Show today! Yes, THAT Today Show! (eee!) It’s for the Olympics and will air during The Games. It’s a cultural piece about Sherlock Holmes and England and the popularity, etc etc. The crew were delightful to work with and we had a good laugh (and lunch!) afterwards. We should have footage for you within three weeks!

Let me just say that ANYONE who can act with a camera has mad props. It’s really hard to ignore a giant machine next to your face. Got there after awhile, but it’s very distracting!

This was so much fun and it was such an honour to be asked. It’s not every day you wake up to an email from an NBC producer in your inbox. Eee, so yes, we’re going to be on your telly! (well, if you’re American that is.)
Posted by The Baker Street Babes at 08:08