On June 29, the Leipzig ‘Long Night of Sciences’ offered a glimpse behind the scenes to everyone who was interested. Watching chemical reactions, or being introduced to the field of forensic biology, visitors of the Long Night were able to get a picture of what scientific research looks like in Leipzig. But not only the natural sciences were of interest; the humanities make up a large part of Leipzig’s scientific tradition and several institutes decided to participate, including the British Studies institute. I had wanted to do a little Sherlock Holmes related event with my colleagues in order to celebrate the 125th anniversary of the publication of the first Sherlock Holmes story, but things turned out to be much bigger than initially planned. A bookshop close to campus offered to host the event; the perfect location to talk about Sherlock Holmes. Our ‘Sherlock Holmes Night’ was also advertised in the local newspaper and even though we knew that quite the crowd could be expected, we did not anticipate more than 250 people – mostly students – to show up; too many to sit on the 100 chairs the room held, and too many even to stand. A few visitors sadly were turned away at the doors to the bookshop, simply because there was no more room for them to fit in.

The programme consisted of four presentations by British Studies lecturers; starting off with a short introduction of Arthur Conan Doyle and his work by Prof. Elmar Schenkel. It is always fantastic to hear about the many interests Doyle had, and how many different projects he worked on. One might think that he achieved in one lifetime what others would have needed at least three lifetimes for.

The second talk, given by linguistics Professor Sabine Fiedler, was concerned with the phraseology of the Holmes stories and the challenges of translating phrases such as “Elementary, my dear Watson”; including, of course, the discussion of false quotes which are attributed to the original stories, but which only appeared in adaptations and later rewritings of the text.

Dr. Jürgen Ronthaler then spoke of numerous adaptations of The Hound of the Baskervilles, concentrating on the traditional look and almost symbolic markers of the characters of Sherlock Holmes and Dr. Watson throughout the history of the Hound adaptations.

My talk, the last of the evening, was concerned with Sherlock BBC. I compared the series with the original stories, showing similarities and differences, and how – despite updating Sherlock Holmes to the 21st century – the series is still incredibly true not only to the stories themselves, but also to the tradition of detective fiction and Arthur Conan Doyle’s style. The little “Undershaw” insider in Hounds of Baskerville also gave me the opportunity to briefly talk about Undershaw and the UTP.

The evening ended with a screening of the 2002 adaptation of The Hound of the Baskervilles with Richard Roxburgh and Ian Hart.

It was fantastic how many people showed up to listen to the talks and the atmosphere was amazing, despite a failing air-condition and not nearly enough chairs. It’s brilliant to see how interesting Sherlock Holmes is for a younger generation and I do hope that our little Sherlock Holmes night sparked the interest in some of them to go back to the original stories, and find out how it all started. It was a fun night, and I am so glad that we had the opportunity to talk about Sherlock Holmes, who we all love; and to show that Sherlock Holmes is ‘not just popular literature’, but a proper academic subject which can be approached from numerous angles and which is relevant, not only for the study of literature, but also for cultural studies and linguistics. 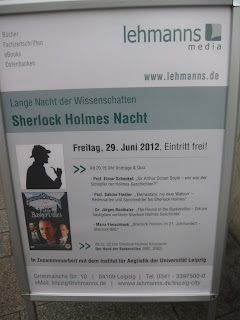 Posted by The Baker Street Babes at 09:43